The Need For More 'Enemies'

Last weekend, surrounded by my kinsmen, I said/asked.
"I've been pro-gay marriage since the '80s. I've been pro-equal rights since the '60s. I’m definitely against systematized racial and sexual discrimination policies and laws. I was raised as a California liberal. I'm for legalization of drugs. I'm pro-abortion. I'm DEFINITELY for free speech (even if it means I have to put up with hearing shit I completely disagree with). I grew in in a place so racially mixed everybody was a minority. I am for assistance for the poor, sick and needy. And I'm a registered Independent. SO HOW THE FUCK DO I GET ACCUSED OF BEING RIGHT WING?"*
I don't know if Steve Pinker came up with a term or I heard it from him first but, "_____(insert left or right) pole." Basically the idea is if you're at the South pole, every direction away from that exact spot is north. Basically if you're so far into an ideology that everything exactly not how you see it means that person is ______-wing, then you've reached the left/right pole.
That makes sense to me and flat out both sides have their own version. I say that to head of the tu quoque crowd. (No shit Sherlock, let me guess the sun comes up in the east too.) But what I want to talk about today is numbers. Well numbers and a few other things that relate. 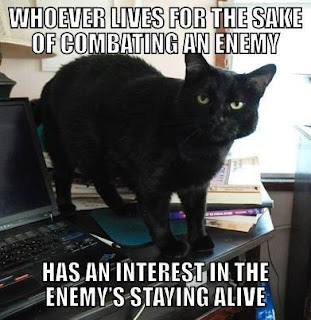 I'm concerned we're going through a period of reestablishing tribalism. A system that our forefathers tried to contain, our grandparents tried to throw out, our parents were taught to ignore and overcome, but now the backlash is happening. There's a strong push to identify with a tribal group and to expand that group's power and control. Thing is, after a few generations of ‘tribalism is bad,’ there’s just a little bit of hypocrisy about denying that’s what we’re doing -- at least to those other rat bastards in THAT tribe.
We're not only going excessively tribal, but aggressively so. Except we’re doing it without the checks and balances that allowed tribalism to work. You know for the oh say 200,000 years of human history instead of just the last 150 years we’ve been challenging the idea and kind of forgotten how to do it.
See a big part of this 'new tribalism' is show your allegiance to your tribe by going after those not of said tribe with hook and claw. This gets you status in your tribe. (If you know anything about American Plains Indian culture and the concept of counting coup, you'll see some parallels.) Now this isn’t really a new thing. In fact, having long established enemies and going after them is very much a part of tribalism. What’s new is doing it without the checks and balances of ye olde days. Like you know, it was considered brave because doing it could get you killed or if you pushed too far you could start a war between your tribes.
Those are just some of the problems with this new version of tribalism. Another one isn’t that obvious until you actually look for it. That is there's kind of a glut in the market (That's called changing analogies in case you missed it.) What do you get when you have more 'qualified' people in a field than you have positions for? The answer should be you get a lot of people working outside their field of training until the glut ends and the market stabilizes. And if it were an ideal world, you'd get trainers/educators telling folks "Hey, this field is glutted right now and it's hard to get a job."
But that's not how it usually goes. First off, people who are doing the training have an economic incentive to keep cranking people out (it's their paycheck). But often, especially if it's a service field and there's 'protection' for the field (i.e., government, academic and business contracts) you typically get an inflated crisis. For example, what do you get when you have too many PTSD 'counselors' and not enough traumatized people?
I'll give you a hint, if someone's a specialist in a problem, he/she will always find a problem -- especially if their paycheck and job security is based on the number of problems they 'deal with.' Along a similar line did you know one of the reasons the Founding Fathers DIDN’T want a standing army was the tendency of governments to find excuses to use them? And now we have that whole ‘military industrial complex’ that Eisenhower tried to warn us about. How are you going to sell your goods and services if there are more providers than a need?
And that starts us back towards tribalism, the poles and our numbers problem. How do you get status in your tribe as a brave warrior if there aren’t enough enemies to fight? Now to really complicate things let’s talk about proximity and scarcity. Another way to look at bubbles and echo chambers is location, location, and location. Hell it’s gotten so bad in Berkeley that they had to import racist redneck, Trump ‘supporters’ to counter demonstrate against. Then, because of an over hunting problem, counter-protestors from across California had to drive all night to get there too. This just so they could say they’ve faced them. (Maybe the Division of Fish and Wildlife should start a California Conservative breed and release program to keep the species from going extinct from over hunting.)
Now I’m making light of it, until you look at the pole. A pole that everyone who is not the same brand as ______(fill in the blank) is automatically labeled the opposite wing. 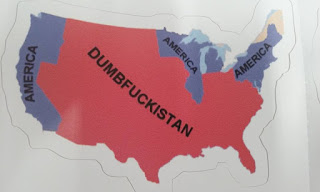 Remember that in the world of careers and funding numbers measure success? What you may not realize is you can look at ‘status’ in your tribe as a numbers game too -- especially when it comes to showing how brave and committed you are. Except what do you do if there are more ‘warriors’ than enemies? How do all the people playing this game get status?
Simple, if you can’t find actual people of that other side, you have to start calling anyone and everyone not EXACTLY like you a ________. And there’s your chance to prove your commitment to the cause. You find the mechanism to do this by going to the pole, because from that position everyone else is an enemy to the tribe you’re so valiantly fighting for.
So next time someone starts calling you names and labeling you -- despite what you actually believe -- take a look at from the perspective that this person is trying to label you for his/her own selfish ends. I don’t know about you, but I don’t like being used like that.
M
*Apparently it's because I'm pro-gun, pro-fiscal responsibility, against corruption and profiteering, not fond of government overreach and budgetary excess (regardless of the cause) and -- perhaps most of all -- I don't shriek and shut people down when they have a position I don't agree wit, so that MUST mean I agree with them. Uhhh... no. It means I really do believe in free speech. 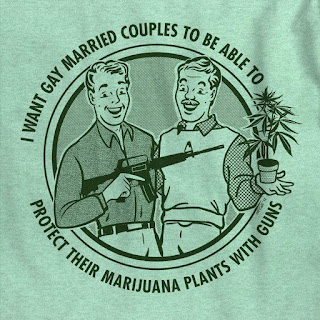