Fighting Our Way Back To The Middle

You know things are seriously screwed up when you find yourself thinking that a Fundamentalist, anti-homosexual streetcorner preacher is the voice of reason. Yet, here it is...

This occurred on Arizona State University property. I don’t know about you, but I kind of hate having to take his side. It is kind of a 'the ACLU defending the KKK's right to hold a rally' situation. ASU /Arizona had a kerfluffle about that dang ol' First Amendment and yes, preaching on campus is protected free speech. So the U -- which takes money from the government -- can’t officially say ‘no.’ However, the hostility of the 'locals' is well known. As this young gentleman so demonstrates with such grace and decorum.

There is something that both interests and concerns me.

As I've said many times, I'm not a Trump fan (or anybody elses). I do however see his popularity as indicative of a growing resistance -- possible push back, hence the concern -- to the bullying and pushing of the progressive behavior.

I know this is a hot button term, but I ask that you bear with me for a while. The behavior is hurting not just people, but the cause. The behavior isn’t just shutting down communication, but it’s eroding support and credibility. For example, this kid. MSU. Yale. BLM at rallies, Occupy, Deadlocks, etc. The list long and it’s growing longer. It's gotten not just over the top, but they're getting bolder and more aggressive.

Another part of this... well let me explain it this way. Some years ago the PLO/PNA spokeswoman came to speak in Denver and there was a protest. And it was serious. No fancy camera shots to make 20 people look like a mob. There were lots of people. The local News interviewed a cop on the scene and he was... disquieted. His observation was "Usually with protests you see the same faces every time. This protest is different. These are everyday people." When everyday people -- who really don’t have a dog in the fight -- start turning against you, it’s time to reevaluate strategies.

Then comes the next step. There's an old protest quote often attributed to Ghandi "First they ignore you. Then they laugh at you. Then they fight you. Then you win." ( A sub-variant of this is with 'hate you.') While it's an inspiring quote for those calling for social change, it kind of overlooks the number of times movements have failed miserably. Not just squished, but failed. There are a lot more of those times than ‘wins.’ Often when movements turned toxic and went too far resulting in their allies pulled away. These aren’t everyday people, these are allies, if not your support base.

Something that I'm noticing among all the clamor of all these protests is what voices aren't there. Voices that have traditionally been there for these movements aren't pitching in as much. And that is VERY telling.

I've long made a distinction between Liberals and Progressives (remember, I was raised Liberal). Again, I know this is a kneejerk issue, but please hear me out. I strongly feel there has been a gradual hijacking of the liberal agenda by extremists and special interests. I first noticed this change when I heard the term "Hold my nose Democrat." These were some very smart people saying they hold their nose and vote Democrat -- basically as the lesser of two evils.

I’m seeing an erosion of liberal support of this behavior; and like erosion it’s not a loud process. It used to be that folks were always there supporting a position out of reflex. Someone says it and you get the 'yeahs' and 'me toos.' But things have progressed to the point where a lot of folks ...well they could be quoting the movie "The Abyss" with "Hippy, quit being on my side." Except they aren't saying that yet.

What they are doing is not saying anything.

And that silence is telling. For example, take the Dreadlocks/cultural appropriation confrontation incident that happened at San Francisco State University. The SFGate ran an on-line article about it. Now my feelings about San Francisco is if there was a zombie apocalypse there'd be Zombie Rights activists in SF. (Along with the traditional hip 'yeah' and "me too" support from the coffee shops and microbreweries.) My jaw hit the floor when reading the comment section. At the time, nobody came out in support of her. In fact, the comments were unanimously against the woman’s behavior.

The fact that people from other political positions are beginning to come forth saying ‘enough’ is very telling, but so too is this growing silence. Things might be moving beyond just pretending these problems don’t exist in your own group. Kind of like Christians don’t have a problem admitting that the Westboro Baptist Church isn’t representative of all Christians, people with a more liberal persuasion have an opportunity to actively distance themselves from the more aggressive and hostile elements weaponizing what you sincerely believe in. Do you really want those folks dictating what it means to be ______(fill in the blank)? 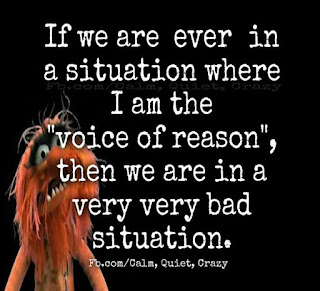 At the same time I’m going to suggest that this is a chance -- and please God, don’t let it be the last chance before the SHTF -- for people to start coming back to the middle.

That means people from different positions talking to each other instead of letting the extremists of their own side tell them what those ‘other people think.’ In case you missed it, that is a shout out to everyone to stop being bullied by the extremists, liars and hate mongers of your side and go out and talk to people who think differently than you. Most importantly, stop listening to the screamers on your side about what the ‘other side thinks’ and actually sit down with the moderates from that side. Yeah, there’s going to be some concern and confusion, but stop and compare notes. Starting with “When you use this term, what exactly do you mean? Because when I use it I mean ______”

I think you will find that you have more in common than you imagined. Including the fact that much of the bullying, abuse and silencing you’ve been subjected to is coming from the more vocal fringes -- who have also been controlling what you can say -- rather than the far more numerous folks who believe a certain way. We’ve been conditioned to be afraid of each other. That’s not a good thing, because after fear comes anger. And a bunches of pissed off, self-righteous people who aren’t actually talking but throwing verbal abuse at each other is just a short step from things getting bloody.

And that’s something that most people don’t want, but the extremists are pushing us towards -- usually by screaming hatred in our ears about what haters those other people are.

If you really want peace, be brave enough to walk over -- with an open heart -- to the other side to find out who they really are. And do it before the extremists on all sides -- including yours -- push us into being cannon fodder for their hatred. 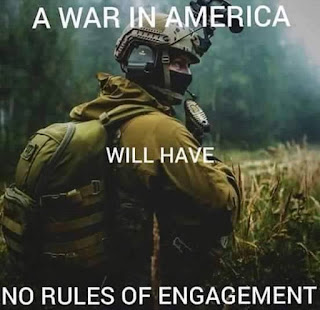 Posted by Marc MacYoung at 4:50 PM